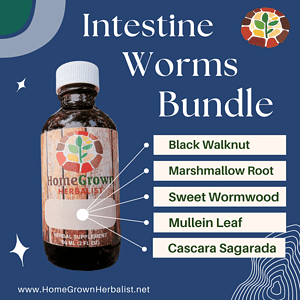 This is a HomeGrown Herbalist Composite Formula, giving you the chance to customize the parts to your preferences. Select what you want, and we’ll ship those tinctures to you!

This is a HomeGrown Herbalist Composite Formula, giving you the chance to customize the parts to your preferences. Select what you want, and we’ll ship those tinctures to you!

The HomeGrown Herbalist  Intestine – Worms Formula is a combination of plants that supports the body’s normal response to worms.

The Dispensatory of the United States of America, 1918, Edited by Joseph P. Remington, Horatio C. Wood and others. - Cascara sagrada


Botanical name: Allium sativum Allium. A plant kept in our gardens for its uses in medicine, and in the kitchen. It grows two fret and a half high. The leaves are broad, long, and of a strong green. The stalk is round, smooth, and firm, upright, and of a pale whitish or bluish colour. The flowers are white and small, but they grow in a large tuft at the top of the stalk. The root is white, or a little reddish; it is composed of a great number of bulbs, or, as we call them, cloves, joined together, and covered with a common skin, and with fibres at the bottom. The whole plant has an extremely strong smell, and an acrid and pungent taste. The root is to be boiled in water, and the decoction made into syrup with honey; this is excellent in asthmas, hoarseness, and coughs, and in all difficulties of breathing.


Botanical name: Althaea officinalis The decorticated dried root of Althaea officinalis, Linné (Nat. Ord. Malvaceae), a plant of salt marshes, river banks, and moist, sandy soils. Europe, Asia, Australia, and Eastern United States. Common Name: Marshmallow. Principal Constituents.—Mucilage, starch, pectin, and asparagin, an odorless and colorless crystallizable body identical with althein and agedolite, found also in many other plants. Preparations.—1. Infusum Althaeae. Infusion of Althaea. Dose, Freely. 2. Decoctum Althaeae. Decoction of Althaea. Dose, Freely. 3. Syrupus Althaaeae. Syrup of Althaea. Dose, 1 fluidounce to 4 fluidounces. Therapy.—External. A soothing application to inflamed surfaces; and may be used as an injection for dysentery, acute vaginitis, and the acute stage of gonorrhea. A favorite gargle for irritated throat. Applied upon a compress, it is reputed to be comforting to painful piles. Internal. An excellent lenitive and demulcent diuretic employed to soothe irritated and inflamed mucous surfaces, in hoarseness, cough due to faucial irritation, gastro-intestinal irritation and inflammation, and as a soothing drink in vesical and renal irritation and inflammation, acute cystitis, strangury and gravel. If the mucilage chiefly is desired, an infusion should be prepared with cold water; if starch, with some mucilage is needed, a decoction. It may be given freely. A syrup of marshmallow is a good vehicle for pectoral medication.