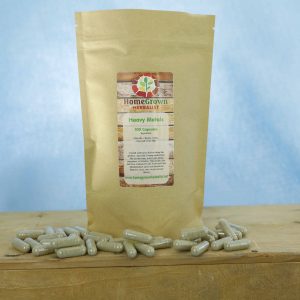 Only 2 left in stock

We also recommend that Liver Builder and Bentonite Clay be taken concurrently with the Heavy Metals formula.

A Manual Materia Medica Pharmacology. Comprising All Organic And Iinorganic Drugs Which Are Or Have Been Official In The United States Pharmacopia by David M. K. Culbreth, Pn.G., M.D. 1917 - Garlic


This is a perennial plant, with sim 1e, stout, erect, jointed, and hollow stems, marked with from 14 to 26 longitudlnal furrows, the ridges rough with 2 rows of minute tubercles, growing from 2 to 3- feet in height, each stem bearing a terminal, ovoid spike. Frequently 2 or more stems are united at the base from the same root. The sheaths are from 2 to 3 lines long, from an inch to an inch and a half apart, ash white, black at the base and sum mit, short, with subulate, black, awned, deci uous teeth, which leave a bluntly crenate margin. The fertile plants are mostly leafless. The fruit is placed under eltate polygons, being pileus-like bodies, arranged in whorls, forming a spike ike raceme, from 4 to 7 spiral filaments surround the spores, which resemble green globules, and which roll up closely around them when moist, and uncoil when dry (G.—W.). History and Chemical Gom osition—This plant is common to the northern and western parts of the United Qtates, growing in wet grounds, on river banks, and borders of woods, and maturing in June and July. Together with other Cryptogamia, this species abounds in the fossil remains of coal measures, indi cating that they were once of gigantic dimensions, and formed a large part of the original flora of our globe. Silica enters largely into the com osition of these plants, on which account they have been used to scour, rough o ish, etc., 1.4 per cent of a brownish‘green, semi-fluid fixed oil, easily saponifia 1e, was abstracted from this plant by F. J. Young, by means of petroleum benzin (Amer. Jour. Pharm, 1886, . 420). The plant left 18.2 per cent of ash, and proved to be free from tan nin, aTkaloid, or glucosid. Mucilage, sugar. and a soft, green resin were shown to be present. The equisetic acid of Braconnot was found by Regnault to be identical with (wonitic acid. The whole plant is medicinal, and imparts its prop erties to water. Action, Medical Uses, and Dosage—Diuretic and astringent. An infusion (Zij to aqua Oj) drank freely, has been found beneficial in dropsy, suppression of urine, hematuria, gravel, and nephritis aflectimw; and has also been used with advan tage in gonorrham and gleet. This drug has a specific action in irritation of the bladder, and in dysuria with tenesmic urging, in the nocturnal urinal incontinence of children, and in urinal incontinence, the effect of cystic irritation, it is a very serviceable remedy. The infusion or the decoction of the green stalks is preferred. The ashes of the plant are very valuable in dyspepsia connected with obstinate acidity of the stomach, and may be given alone, or combined with powdered rosin, or hydrochlorate of berberine, etc. Dose of the ulverized ashes from 3 to 10 grains, to be repeated 3 or 4 times daily. The resh juice may be given in 1 or 2 ounce doses, administered in water. Specific equisetum, 5 to 60 drops.

The Dispensatory of the United States of America, 1918, Edited by Joseph P. Remington, Horatio C. Wood and others. - Rose Hips


Rosa.—Of the genus rosa at least four species have been, and probably to some extent are still, use in medicine—namely, Rosa canina L., Rosa centifolia L., Rosa damascena Mill., and Rosa gallica L. Rosa canina.—The Dog Rose, Wild Brier, or Hip Tree, of Europe, is distinguished by its prickly stem and petioles, and ovate, smooth, rigid leaves. It has white or pale red flowers, having usually five obcordate fragrant petals. The fruit consists of a fleshy, hollow receptacle, bearing on its inner surface a number of hairy achenes. The ripe fruit, which is usually employed in the fresh condition, is ovoid, smooth, shiny and of a reddish color. The summit is crowned with 5-calyx teeth. Rose hips possess a pleasant, sweet, acidulous taste. It was formerly official in the British Pharmacopoeia under the name of Rosae Caninae Fructus. It contains about 30 per cent. of sugar, combined with citric and malic acids, also salts of these acids, and a trace of tannin. It was used for the preparation of an acidulous confection. Vanillin has also been found present in the petals. Rosa centifolia has prickly stems and the leaves consist of two or three pairs of leaflets, with an odd one at the summit, closely attached to the common footstalk, which is rough, but without spines. The leaflets are ovate, broad, serrate, pointed, and hairy on the under surface. The flowers are large, with many petals, generally of a pale red color, and supported upon peduncles beset with short bristly hairs. The varieties of R. centifolia, produced by its almost universal cultivation, are very numerous, but the plant is said to grow with single flowers in the eastern part of the Caucasus. It is very closely allied to R. gallica, some botanists maintaining that the species are really one. The petals, which were recognized by the U. S. P., 1890, as pale rose, are roundish-obovate and refuse, or obcordate, pink, fragrant, sweetish, slightly bitter, and faintly astringent. They contain volatile oil, malic and tartaric acids, tannin, fat, resin, sugar, and a coloring matter which seems to be identical with that of the red rose. They should be collected when the flower is fully expanded but has not begun to fall. Their fragrance is impaired but not lost by drying. They may be preserved for a considerable time by compressing them with alternate layers of common salt in a well-closed vessel, or beating them with twice their weight of that substance. A rose water is often prepared from them by distillation. Rosa damascena is not known in the wild state, and is thought by some botanists to have been produced by cultivation by hybridizing R. gallica with R. canina. It is the rose which is cultivated in Turkey and yields the commercial otto of rose. (See Oleum Rosae, p. 870.) It is a tall shrub with semi-double, light red to white flowers of moderate size, having several on a branch, though not clustered. Its volatile oil is the base of rose water.